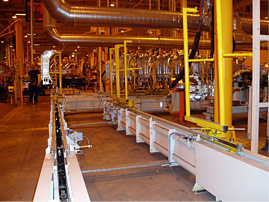 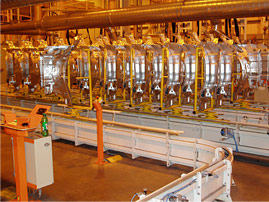 Land Rover in Solihull, Birmingham is the world leader in 4×4 vehicles.

When their engineers were designing the new T5 production facility they had a major problem in finding handling and storage space in a confined area for the inner front wing assemblies.

After contacting Midland Handling Equipment our engineers designed twin inverted ‘406/406’ Power & Free Conveyors, one for right hand wings and one for left hand.

Carriers are loaded with 2 wings by the operator and then sent around the system to wait in a queue for offloading onto an automatic robot- welding jig. Having the facility to store 24 of each wing on the conveyors enables a ‘buffer’ storage which ensures the automatic robots are never starved of components, even during shift changes and operator breaks.

The system is controlled via a number of pneumatic gates and stops, operated via control button and sensors. The special indexing carriers are rotated automatically into the correct orientation depending on if they are in storage or load/offload stations.

Although each system is only 150ft long, necessary due to the space limitations, by using innovative designs and lateral thinking Midland Handling engineers solved a major problem that Land Rover and even other conveyor companies were struggling with, an the whole project came in at under £100,000.